6 Bacteria-Contaminated Airplane Foods You Should Avoid No Matter What 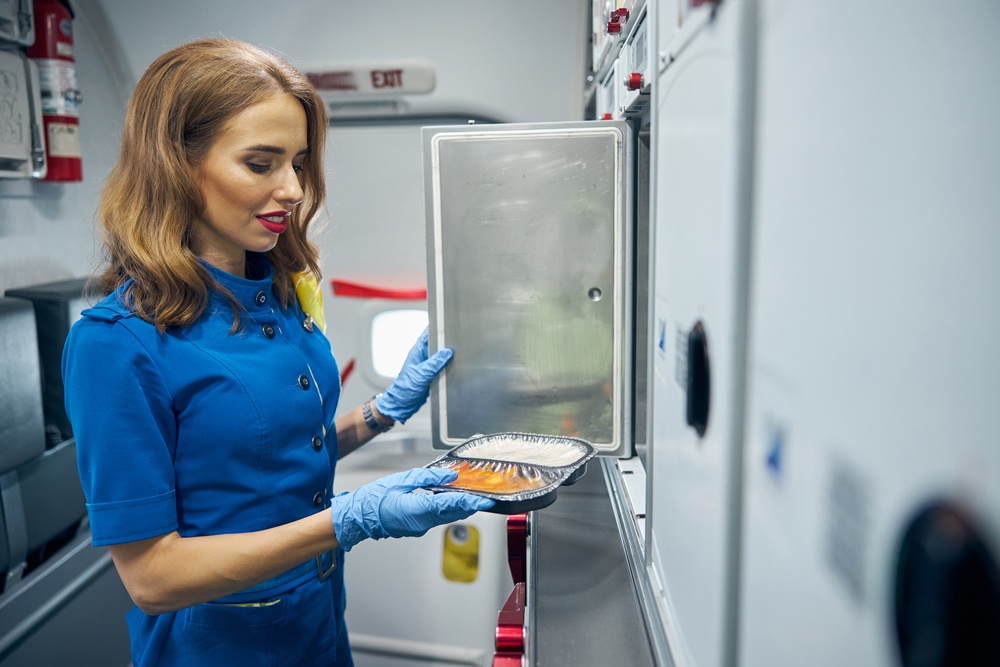 If you have to fly somewhere and haven’t had a chance to eat something before you go, you might think grabbing something to eat on the plane is a good idea. It might be, but that depends on what you choose to eat because some foods are riskier than others when it comes to your health.

Sure, in-flight meals have to comply with certain safety standards, but this doesn’t mean harmful bacteria cannot creep in and contaminate some of the food it’s about to be served to passengers. In fact, the risk of pathogen contamination is greater in the air because of the lag time between preparing and serving the food.

As explained by airline food safety expert Jean Dible, “In the restaurant industry, food is cooked and served without delay.” On the other hand, in the aviation sector, a catering company is in charge of preparing the food, storing it in sealed containers and delivering it to airports to be taken aboard the planes. This entire process can affect the temperature of the food, making it unsafe for consumption.

To err on the side of caution, here are 6 types of foods you should definitely stay away from next time you travel by plane, according to food safety experts. 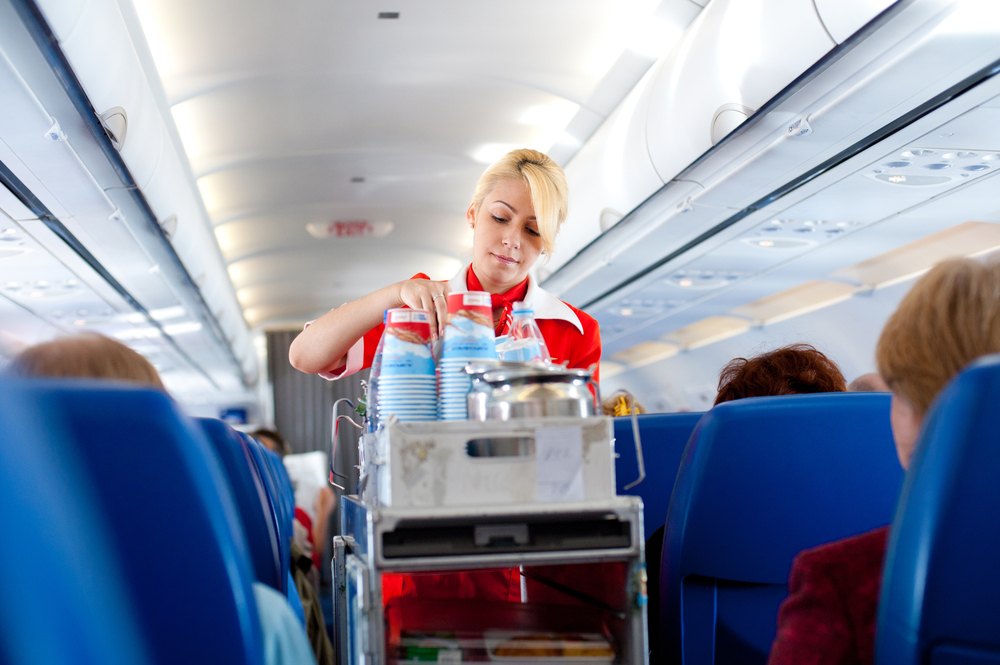 According to food safety experts, some of the foods you should stay away from during a flight include yogurt, cottage cheese and ice cream. The main reason is that dairies, in general, have a short shelf-life and spoil much faster if not stored in proper conditions.

Sometimes, you can’t even tell that a product is spoiled because there’s no foul smell or taste. But the bacteria are there, even if the contamination effects are not clearly visible. “You can’t see anything — there’s no odor, nothing you can see. It’s invisible,” she says. More than that, airline catering companies do not always throw away the food in time, says Dible.

See also 6 Things You Absolutely Shouldn’t Do If You Have to Fly Right Now.

Deli meats are usually processed and ready-to-eat, so, without the re-heating process to destroy the bacteria, it remains there until you eat it, warns Aurora Saulo, a professor of food safety and specialist in food technology at the University of Hawaii.

This means sliced turkey, bologna and the like are out of the question as they contain listeria, according to the FDA. This is why sandwiches and similar foods have to be “kept at a temperature that will discourage the multiplication of pathogens,” Saulo says. “It’s mainly about maintaining a temperature so it can be given to the passengers.” 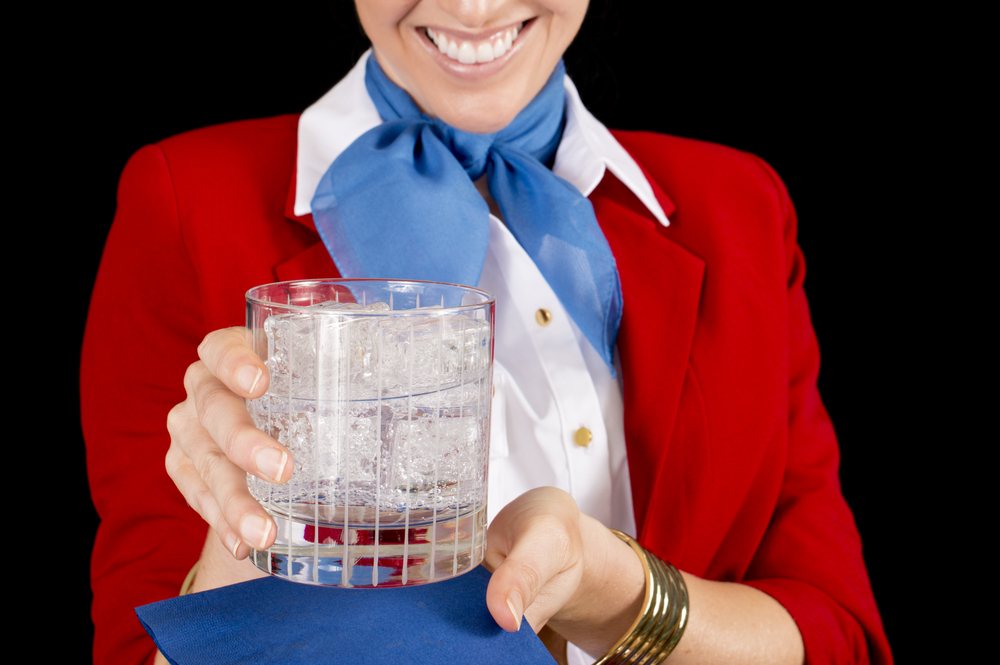 It’s not just sandwiches that can become contaminated with dangerous bacteria. According to food safety experts, ice cubes can also pose a threat to one’s health. The main problem with ice is the lack of strict food safety training among flight attendants.

In some unfortunate cases, they do not wash their hands thoroughly or use gloves when handling ice cubes. “I do not use ice on a plane,” food safety expert Melvin Kramer of the EHA Consulting Group “I find the flight attendants almost wash their hands in the ice.” In the light of the coronavirus pandemic, hygiene might be an issue anymore, but you never know. Just like you can’t imagine hotels are doing these 10 Gross Things to Save Cash Despite the Pandemic.

Fruits and vegetables might be healthy and choke-full of vitamins but not when eaten during a flight. That’s because, just la deli meats, raw fruits and vegetables do not get reheated before being eaten, which means they don’t undergo any bacteria-elimination process, Dible warns.

Among the more vulnerable and riskier, melons and leafy greens are more susceptible to contamination because they are grown in the fields and are exposed to bacteria from the soil, water and composted manure. As explained by Dible, if a melon, for instance, has bacteria on the outer layer, the bacteria will also reach the edible part the minute you cut the melon, even if the fruit is washed.

Apart from being contaminated in the field, fruits and vegetables can also risk contamination during storage and transport. In the case of melon, bacteria multiply every 20 minutes if the fruit is not stored at the right temperature. Sprouts are also more susceptible to contamination because they require warm, humid conditions, the same conditions bacteria require to grow as well. Therefore, avoid eating lightly cooked sprouts like alfalfa and pea varieties as these can contain harmful germs like Salmonella, E. coli, and listeria and cause food poisoning. 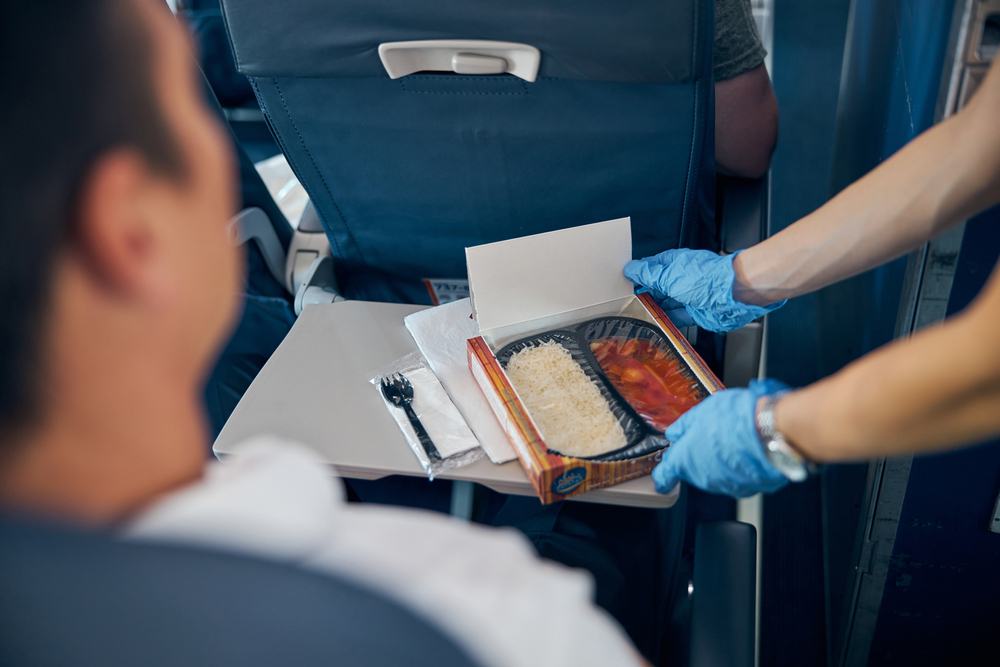 If you’re thinking of eating something with rice while traveling by plane, you might want to reconsider your options. That’s because rice, if not cooked properly, can contain Bacillus cereus bacteria, which is heat stable and may not be destroyed by ordinary cooking.

More than that, not storing the cooled rice at the right temperature can facilitate the multiplication of the Bacillus spores and “the Bacillus bacteria toxin will make a person very sick for several days,” Dible warns.

Food safety experts recommend reheating the rice to 165 degrees Fahrenheit in order to be consumed safely. To know the safe cooking temperature, you need to use a cooking thermometer, something flight attendants don’t have.

Something served with rice during flights that many passengers enjoy: shrimps. Unfortunately, as delicious as it may be, seafood can also put you at risk for infections, including vibriosis, caused by variations of the Vibrio bacteria.

In a 2015 study by Consumer Reports, 60 percent of frozen shrimp on planes tested positive for bacteria such as Salmonella, Vibrio vulnificus, listeria or E. coli, and 2 percent contained methicillin-resistant Staphylococcus aureus (MRSA), a staph infection very difficult to treat because of its resistance to antibiotics. Despite “all seafood, but in particular shrimp and oysters, are pretty darn dangerous”, […] “they serve a lot of shrimp aboard first-class.” 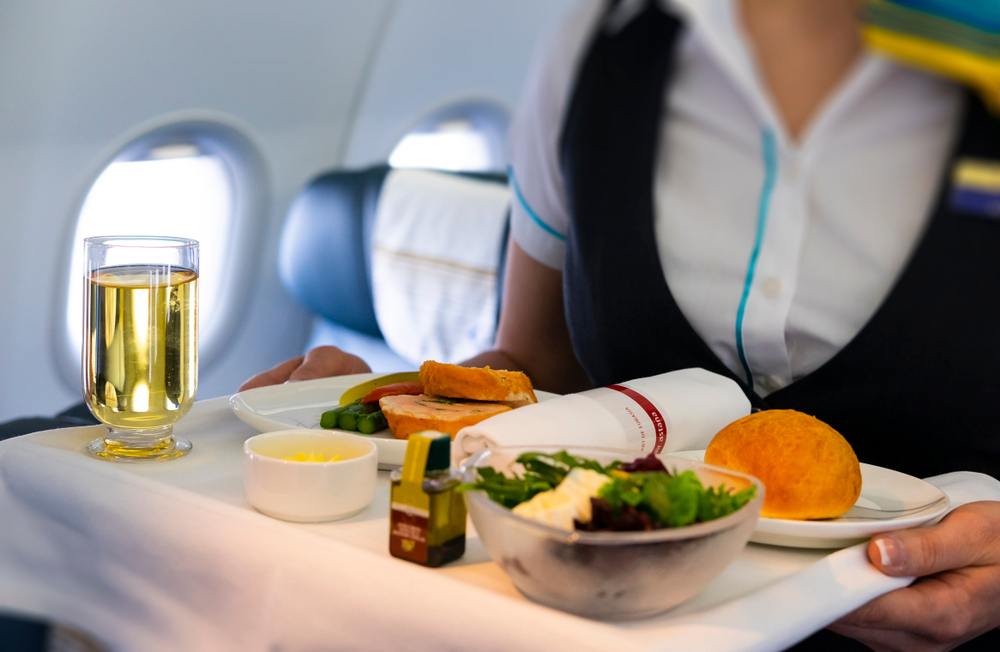 Instead of putting yourself at risk by eating unsafe foods, opt for soups and stews which are cooked and reheated at temperatures that destroy the harmful bacteria. Dible also suggests bread, rolls, crackers, packaged bakery products and packs of pretzels.

When it comes to fruits and vegetables, opt for something like bananas or oranges, which you can be peeled off, or something in a sealed container. Water bottles, coffee and tea are usually safe to consume, as bacteria are killed by hot water.

Also, don’t forget to play on the safe side and wash your hands too and practice good hygiene at all times, even when up in the air.

RELATED: 11 Things You’ll No Longer See in Airplanes After Coronavirus